The media frequently talks about the threat of terrorist attacks, but ignores most of them. Cenk Uygur, John Iadarola, and Jordan Chariton, the hosts of The Young Turks, tell you what type of terrorism the media ignores. Tell us what you think in the comment section below. https://www.tytnetwork.com/go

“At his first address to a joint session of Congress last month, President Trump reiterated his administration’s focus on “radical Islamic terrorism.” A few weeks earlier, his administration had provided a list of terrorist attacks it claimed were underreported by the news media. The list primarily included attacks by Muslim perpetrators.

The implication was clear: Muslims do more harm than the media want you to believe. Terrorism scholars quickly discredited that suggestion.

How we did our research

When there’s a terrorist attack, the coverage seems to dominate the cycles for hours, days and sometimes weeks. How can it be accurate to claim that the media really underplays or hides terrorism? Fortunately, this is a question that we can investigate through research.”

Over the past 3 weeks I’ve spent a significant amount of time researching through the Biography of the Prophet Muhammad (pbuh) and putting together a number of tables which record the statistics of each battle that took place during his lifetime.  This was due to a number of articles written by Islamaphobes which depicted the Battles of the Muslims at that time as if they were monstrous massacres numbering in the hundreds of thousands.  This insinuation for anyone that knows Islamic History and the population statistics of that time would find these grossly exaggerated claims quite amusing.

It should be known that the tribes in the Arabian Peninsula in the 7th century were not very large, and usually consisted of only a few hundred people.  At the time the Quraish, which were considered one of the largest tribes in Arabia, could only muster around 3000 from their own tribe to fight during the Battle of Uhud.  So if you were to take that number of 3000 and factor in the Women, Children and Elderly (which collectively is about 3x the number of Males) then one could estimate that the whole population of Meccah didn’t exceed 10,000 people.

So with that in mind let me present to you the results of my findings.  First off I suggest you quickly glance over this key I made that will help you understand the tables I made better. 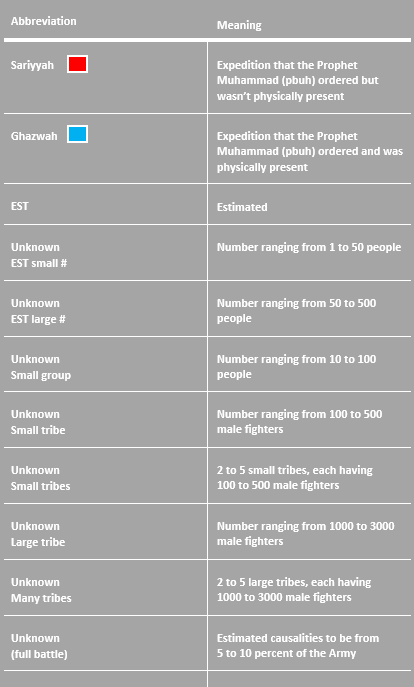 You will more in likely need to glance back and forth to this key to get an idea of the estimated results.  I hope that these charts will help shed light in just how low the casualty numbers really were during the Battles of the Prophet Muhammad (pbuh).  So without further or do let us take a glance of the Tables I’ve put together.  Keep in mind that these tables start from Year 1 After Hijrah and span all the way until the prophet Muhammad (pbuh) passes away in year 11.

(Note: To enlarge photos just click on the Table you wish to see better, you can then click go back to return to the article.) 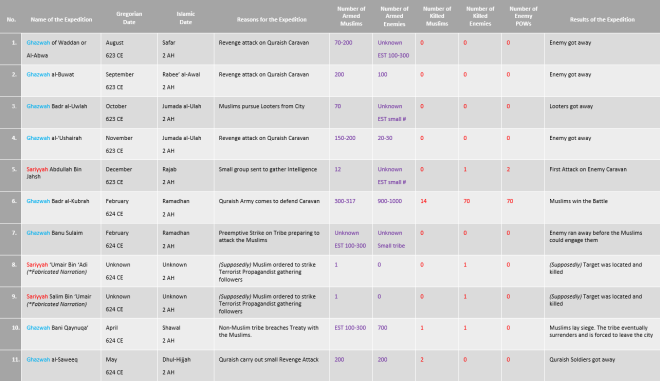 To conclude as you see the numbers are nowhere as high as many Islamaphobes make them out to be.  Even though the Battles during the prophet Muhammad’s (pbuh) lifetime were very significant and important, they were for the most part had very small casualty figures.  This is due to the fact that war in the 7th century mainly consisted of weapons that when used injured but not kill.  Usually when men got struck in the arm or side with a spear they would stop fighting and retreat so that they could fight another day.

Also, even in very large scale battles, usually the numbers of dead from any army wouldn’t exceed 10% before the men would give up and retreat.  Rarely in the Arabian Peninsula wars, and never during the prophet Muhammad’s (pbuh) time, was there an all out massacre in Battle.

So I hope this shed light on the reality of this issue and will help refute the Islamaphobes false claims that Muslims massacred Tens of thousands of people.  This just simply wasn’t the case.