The New Testament of today is described as follows regarding the NA28 GNT:

“The intention of this edition lies not in reproducing the “oldest text” presented in the oldest manuscript but in reconstructing the text of the hypothetical master copy from which all manuscripts derive, a text the editors refer to as the initial text.”1

We should therefore understand the New Testament not to be the word of God, but the hypothetical reconstruction of the “word of God”, a prototype, a possibility of what the reconstruction of the initial text may have looked like. When one examines the earliest manuscripts, we quickly find a trend that cannot be sidelined or ignored, the earliest witnesses place us in the late 2nd to 4th centuries CE: 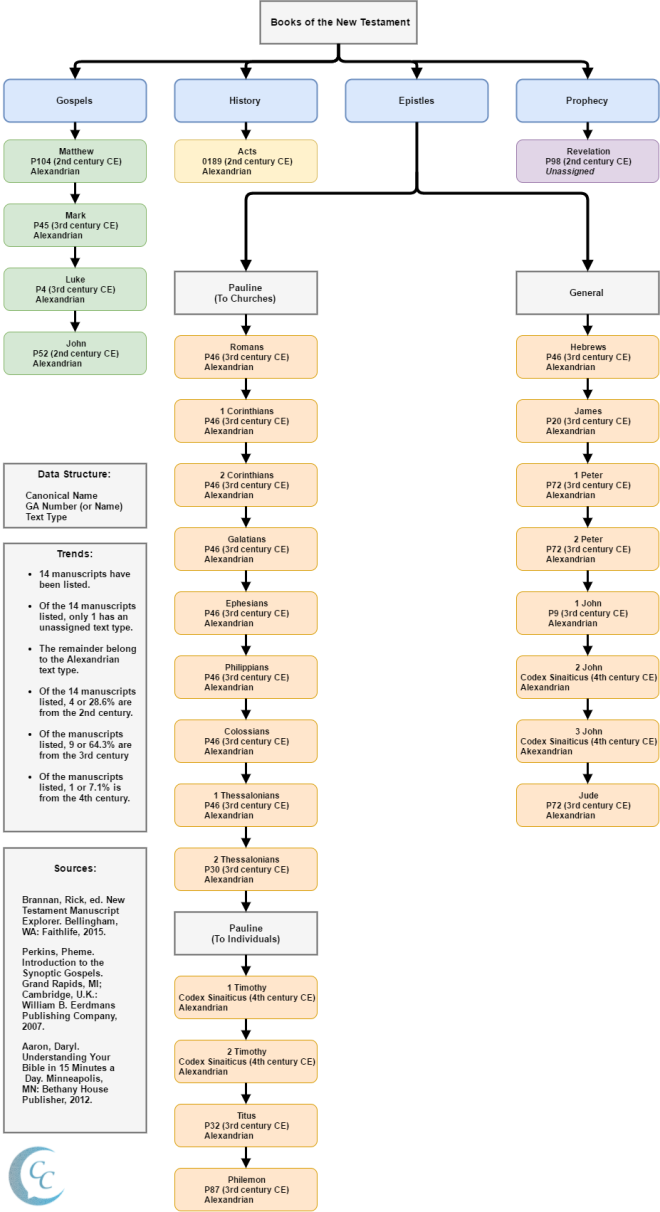 The graph above concisely breaks down what books of the New Testament have as their earliest surviving (extant) witnesses. It also conveniently breaks down the New Testament into its genres and text types. The vast majority of manuscripts are from the 3rd century CE, meaning that the reconstructed prototypes give us a picture of what these completed texts may have looked like during or beyond the 3rd century CE. What is most notable, is that one of the earliest surviving sources attests to 9 books. That does not bode well for multiple attestation. Other books find their earliest witnesses in the 4th century including 1 Timothy, 2 Timothy, 2 John and 3 John. These all indicate an intermediate or initial text projected into the 3rd century, some may say the 2nd century. Scholars have long noticed this trend of a later developed text, with one notable scholar explicitly stating:

Regarding new methods and changes in the NA28, a 2016 publication by the Journal of the Evangelical Theological Society confirms the following:

The application of the CBGM resulted in 34 changes to the main text of
the Catholic Epistles and a slight increase in the number of passages marked as
uncertain. In most cases the changes are of minor significance for interpretation
or translation, but in several cases the changes should not be ignored. At the
difficult variation in Jude 5, for example, the text now reads that it was “Jesus”
(Ἰησοῦς) who once saved a people from Egypt instead of “the Lord” (ὁ κύριος). In
another important change, 2 Pet 3:10 now prints a reading that is not found in any
known Greek witness. Where the previous edition read that the last days would
mean that the earth and all that is in it “will be found” or perhaps “exposed” (εὑρεθήσεται), the text now reads the opposite: the earth and all that is in it “will not
be found” (οὑχ εὑρεθήσεται). The latter reading sits much easier with the surrounding context, but is only attested in a few Coptic and Syriac manuscripts.3

What the data, methods and current status of New Testament Textual Criticism indicates is that we have a text that is much later than is traditionally espoused. The stemmata indicate we currently have reconstructions of a textual form between the late 2nd to 4th centuries CE. There is now an increase in uncertainty regarding the variant units, in other words confidence has been lost in several cases. In other cases we find texts that affect theology or which textual critics indicate are important changes which are labelled as “difficult”, the consequences of which cannot and “should not be ignored”.

We also see in the aforementioned quote that texts now essentially teach the opposite of what they once said! All exegeses commentating on the previous reading have now been rendered invalid by a text reading in the opposite direction altogether. In one other notable case, we also now find a reading in the text that has no manuscript support whatsoever among any known Greek witnesses. All of these trends do not paint a good picture for the state of the New Testament’s reliability. The text of the New Testament today, is not the text known to those at any other time in the past, which brings into doubt their salvation. If  believing in scripture is a criterion for salvation, and the text believed then is not the text now, can we say those in the past truly believed in and embraced the “living word of God”? If the text that penetrated them for guidance is not the text of today, then does it matter at all what the New Testament says?4

3 – Gurry, Peter J. How Your Greek NT Is Changing: A Simple Introduction to the Coherence-Based Genealogical Method (CBGM). Vol. 59. Series 4. Journal of the Evangelical Theological Society, 2016, 684-685.

The title of this journal’s essay should not be ignored. The text of the New Testament is indeed changing, to say otherwise is to ignore the very existence of the critical editions.

Many commentators have said that the Bible is the living word of God, a scripture that penetrates us spiritually and guides us. If that is the case, then if the text changes, we have to ask, what form of the text is actually the living word of God? If an edition previously caused spiritual changes but is now changed, does that invalidate its spiritual guidance or does it indicate that the changes are wrong and the edition is correct? It’s a dilemma either way, which definitely brings into severe doubt the ideas of scripture, salvation and the work of a living word of God among Christian believers.