With all the horrible scenes we see today of Secular Arab Tyrants and Islamic Extremists throughout the Middle East killing innocent people in the thousands, it isn’t surprising that Non-Muslims in the west would believe that the people’s religion might have a role in these atrocities.  Especially when you see how many Terrorist organizations in the region are taking advantage of ignorance people and using their faith to further their cause and to garner support for their unquenchable thirst for power.

Yet in this ever changing world, with so many cultures and religions interconnecting and mingling on a day to day bases, it isn’t acceptable that we still find people today that are so quick to form an opinion or reach a conclusion about another faith without having done the proper research.  Especially in this day in age where we have quick access to so much knowledge and have a sea of credible information at our fingertips.

So with that said I would like today to cover the ever popular topic of Muslims being permitted to kill women and children.  This sadly has become a very common talking point with many Right Wingers and Islamaphobes alike who – for the most part – have essentially reached their conclusions based upon the recent actions of a handful of Muslims, and not the Islamic Texts or the Historic application thereof.  Now even though you might get some Senator or Pastor that could quote you a Quranic verse here and there which talkis about “Fighting the Infidels,” rarely will you ever find them presenting a historic example where the Muslims applied their particular interpretation of those verses.  That is simply because – for the most part – they do not exist.

Take for instance the oft-parroted phrase that Muslims believe you “Either Gotta Covert to Islam or be Killed!” (usually said with the Southern accent.)  Now to the ignorant scared Christian American these people might seem like they know what they are talking about, but for the well informed Muslim, we know very well that these people don’t have any clue what they’re talking about.  And just because someone can site a Quranic verse or Hadeeth here and there that doesn’t make them an Islamic Expert, nor makes them qualified to come and make accusations against a faith of 1.7 Billion people. There are 5 year old Muslim children today mind you that can recitethe whole Quran front and back in Arabic.  Are we now going to allow them to host conferences about Islam and speak to thousands of police officers and military personnel about the threat of Terrorism?

So now that I have made my point the ridiculousness of the whole Western Islamaphobia fiasco, let me get to the crux of this article.  I wanted to present to you a very nice story which happened during the time of the prophet Muhammad (pbuh).  A story which will help shed light or help refute a very common claim made by Islamaphobes and Extremists Zionists that falsely claim that Muslims are allowed to kill women and children in Islam.

To refute this I wish to share with you the story of the Famous companion Khubaib (ra).

Our story begins in the second year after the prophet Muhammad’s (pbuh) migration (which is about 624 CE).  At that time a delegation had come to Medina and requested from the prophet (pbuh) to send with them a number of knowledgeable Muslims to teach them about Islam.  The prophet Muhammad (pbuh) gladly obliged, and sent with the delegation 70 of the Most knowledgeable Muslims in Medina.  Little did they know though, but the delegation were intending on killing every single one of the sent with them. And so when the Muslims reached an area called “The well of Rajee’,” these criminals decided to carry out their horrible plan.  Everyone of the 70 Muslims were killed except for two individuals.  One was known as Zaid and there other was the hero of our story Khubaib.

The two prisoners were then taken back to Meccah where they were sold to families o that wished to extract revenge against the Muslims.  Khubaib was  sold to the Al-Harith tribe, whose leader was killed by Khubaib during the battle of Badr.  After purchasing Khubaib, he was then taken and held in one of the houses of the Al-Harith tribe to was as the men make preparations for his execution.  Having realized that his death was close at hand,  Khubaib asked his captors if they would lend him a razor and allow him to clean himself up before he was to die.  One of the daughters of Al-Harith then brought him her razor and left him alone so Khubaib could prepare himself.

After some time had passed the women who had brought Khubaib the razor suddenly noticed her child was missing and began to frantically search him.  Then, remembering that the prisoner in the other room had a razor she panicked and went racing up to see if her son was there.  As she raced into the room  she was stopped in her tracks as she looked in horror at her child that was now sitting happily on the lap of Khubaib while he proceeded to shave.  Apparently the child had managed to crawl up the stairs all by himself and entered the room where the prisoner was being held.

As  she stood there frozen in terror, Khubaib looked and noticed the woman standing some a distance away.  It didn’t take him long to see that the woman was completely distraught and in a panic.  And so after realizing what she was thinking, Khubaib quickly reassured her saying:

“Are you afraid that I would actually kill him?  By God I would never do such a thing.”

He then let the child return back to his now relieved and grateful mother.  Khubaib was to be crucified a short time later, but even after his death that women always spoke highly of him to others saying how he was the most upright prisoner she had every met.

This my friends is the founders of Islam.  These were the type of righteous men who stood side by side with the prophet Muhammad (pbuh) and through the sheer magnificence of their character lead thousands of people to Islam.  They were not petty thieves or people who murdered innocent people out of revenge.  They were servants of God and men at service to the people.  They fought wars only when it was necessary, and always extended an arm of mercy and peace to those who were willing reciprocate.

Now take that example and compare it to the character of Terrorists we know of today.  Imagine if one of those characters you saw on News were in the same situation of Khubaib and ask yourselves,  “would they do the same thing?”  If not, then you know that those men and the Muslims who lived during the time of the prophet Muhammad (pbuh) are not one and the same.  They are following something completely different than what was being taught to those Muslims at the time of the prophet Muhammad (pbuh).

It’s time we stop blaming Islam and Muslims for the crimes of a handful of individuals who just so happen to be of the same faith.  Every religion, race and people have their criminals and nutcases.  Muslims are no different.  But know, our History and the forefathers of our religion are the people Muslims exemplify, not these criminals today that have hijacked our faith and stained our reputation.

The source of the story can be found on Page 1128: Volume 2 of “The Noble life of the Prophet” (peace be upon him) by Dr. ‘Ali Muhammad As-Sallaabee.
You can download the book free from here:  The Noble Life of the Prophet
Or you can purchase the 3 volume set here: Amazon Link 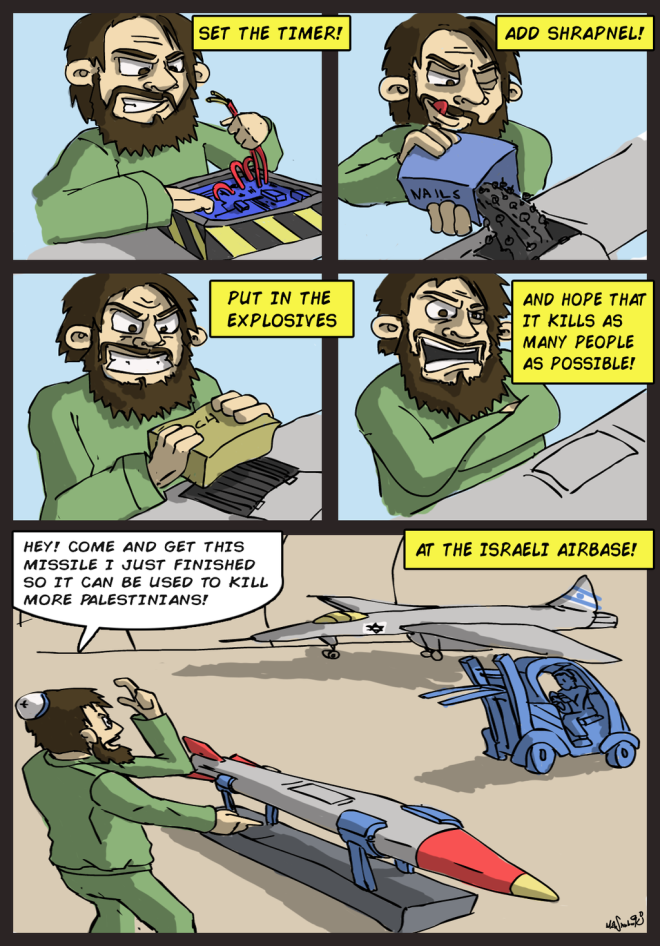 This comic was made to make the viewer think.  People in the West tend to view conventional weapons of war as a somewhat cleaner and more civilized way of killing.  But that isn’t how the families of their bombs and missiles feel.  Their mothers, daughters and sons cry just the same, be it from the suicide bomber or an F16 or Drone.

Over the past 3 weeks I’ve spent a significant amount of time researching through the Biography of the Prophet Muhammad (pbuh) and putting together a number of tables which record the statistics of each battle that took place during his lifetime.  This was due to a number of articles written by Islamaphobes which depicted the Battles of the Muslims at that time as if they were monstrous massacres numbering in the hundreds of thousands.  This insinuation for anyone that knows Islamic History and the population statistics of that time would find these grossly exaggerated claims quite amusing.

It should be known that the tribes in the Arabian Peninsula in the 7th century were not very large, and usually consisted of only a few hundred people.  At the time the Quraish, which were considered one of the largest tribes in Arabia, could only muster around 3000 from their own tribe to fight during the Battle of Uhud.  So if you were to take that number of 3000 and factor in the Women, Children and Elderly (which collectively is about 3x the number of Males) then one could estimate that the whole population of Meccah didn’t exceed 10,000 people.

So with that in mind let me present to you the results of my findings.  First off I suggest you quickly glance over this key I made that will help you understand the tables I made better.

You will more in likely need to glance back and forth to this key to get an idea of the estimated results.  I hope that these charts will help shed light in just how low the casualty numbers really were during the Battles of the Prophet Muhammad (pbuh).  So without further or do let us take a glance of the Tables I’ve put together.  Keep in mind that these tables start from Year 1 After Hijrah and span all the way until the prophet Muhammad (pbuh) passes away in year 11.

(Note: To enlarge photos just click on the Table you wish to see better, you can then click go back to return to the article.) 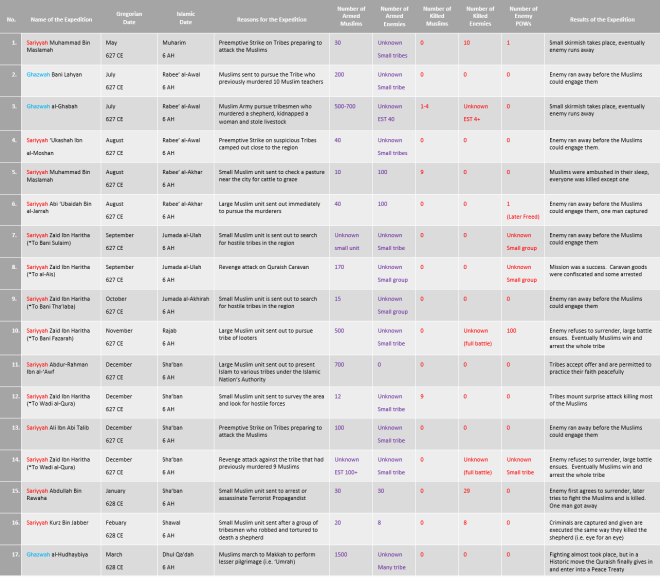 To conclude as you see the numbers are nowhere as high as many Islamaphobes make them out to be.  Even though the Battles during the prophet Muhammad’s (pbuh) lifetime were very significant and important, they were for the most part had very small casualty figures.  This is due to the fact that war in the 7th century mainly consisted of weapons that when used injured but not kill.  Usually when men got struck in the arm or side with a spear they would stop fighting and retreat so that they could fight another day.

Also, even in very large scale battles, usually the numbers of dead from any army wouldn’t exceed 10% before the men would give up and retreat.  Rarely in the Arabian Peninsula wars, and never during the prophet Muhammad’s (pbuh) time, was there an all out massacre in Battle.

So I hope this shed light on the reality of this issue and will help refute the Islamaphobes false claims that Muslims massacred Tens of thousands of people.  This just simply wasn’t the case.

There are two extreme groups when it comes to how Muslims are to deal with the Heads of State. We should not go into extremes either way. Instead we should call out the wrongs when it is done by whoever is committing the action. And we should also pray and hope the best for our Leaders and fellow Muslims.

What this story shows is that even the most Oppressive Rulers in History respected men who spoke the truth and advised them properly. And the fact of the matter is that the best of Rulers were those who placed around them men who would advise them and told them the truth even when it was bitter.